The Centre Region is one of the participants in the European project RESIST – Regions for climate change resilience through Innovation, Science and Technology, which involves the participation of 56 entities (from 15 countries) and a total investment of 26 million euros (more than 5.6 million euros for Portugal). The European project RESIST, whose launch event took place today, January 18, in Coimbra, grants demonstration projects under the climate change adaptation mission of the European Commission’s Horizon Europe programme. 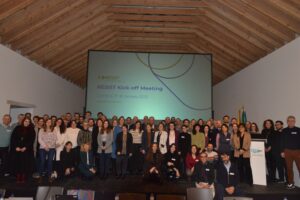 With the goal of accelerating the transformation and increasing the resilience of 12 European regions vulnerable to climate change, the RESIST project foresees the development of innovation demonstration projects in four regions and the transfer of knowledge and innovative solutions to eight other regions.

One of the demonstrators of this project will be developed in the Central Region (in the territories of the Coimbra Region and the Middle Tejo) and has an estimated budget of almost 2.5 million euros. It is focused on the development of solutions for the promotion of a more effective management and valorisation of the forest, to reduce the effects of climate change in the region, more specifically regarding the occurrence of large rural fires. To this purpose, new practices of soil use and occupation and genetic resilience will be implemented, and bio-circulation of green bio-waste solutions will be tested, using new approaches to valorise forest biomass. The final objective is to define new business models and forms of governance of the AIGP – Integrated Landscape Management Areas and Village Communities (“Condomínio de Aldeia”), contexts in which the research will be developed.

For Isabel Damasceno, President of the Centre Region Coordination and Regional Development Commission (CCDRC), “the participation in the RESIST project clearly demonstrates the commitment of the Region to implement policies to combat climate change and mitigate its effects until 2030. Our work, focused on the major problem for the region which is rural fires, will be developed in the context of this large European consortium, benefiting from the knowledge and exchange of experiences with the other partner regions. The Centre region will also be involved in the other three demonstrator projects, focusing on problems that have severely affected the region, such as drought, floods, heat waves and storms.

In addition to the CCDRC, which it coordinates, the Intermunicipal Communities of Coimbra and Médio Tejo Region, ForestWise – Collaborative Laboratory for Integrated Forest and Fire Management, the BLC3 Association – Campus for Technology and Innovation, MédioTejo21 – Regional Agency for Energy and Environment of Médio Tejo and Pinhal Interior Sul and the Polytechnic Institute of Portalegre participate in the development of this demonstrator, as well as the regions of Vesterålen (Norway) and Extremadura (Spain), with whom the results will be transferred. The demonstrator will also be monitored by INOVA+, which has an active role in the RESIST project coordination team.

This project progress can be followed using the information available on its webpage resist-project.eu.

Search for the latest job opportunities. >